This image of the first Hedervary ancestor to come to the Kingdom of Hungary from The Holy Roman Empire (Germany) is from an illuminated medieval manuscript known as The Chronical Pictum or Chronica Hungorarum by Marc de Kalt,  a history of the Hungarian Kingdom written in the 1360s. He and Wolfer arrived in 1041 to help Prince Geza (only 11 years old) secure his throne. In 1046 he defended Geza against the attack of a pretender to the throne and later in 1060 he became the palatine of the kingdom. The Chronical Pictum goes on to say:

"Géza gave them the hill of Küszén and the island beside Győr as their eternal dwellings, where he built a castle, and also had a monastery constructed on that hill, where he is buried.It is from them that the Héder clan is originated."

The Hedervary Castle in the town of Hedervar was built on the ruins of an earlier castle in 1534. Though most of the castle was rebuilt in a baroque style in the 1700s, the hexagonal tower you see at the right of the picture was part of the medieval castle built in the 1200s.

The island Heder received from the king was Szigetköz, the largest in the Danube with a length of 52.5 kilometres (32.6 miles) and average width of 6 to 8 kilometres (4–5 miles). It is a beautiful place and much of it is now a nature reserve. - Eve Hars

Wolfer came from Germany with Heder his younger brother- both counts of Henneburg - with three hundred knights in armour."

"Dezso Sacrifices Himself to Save King Charles Robert"

Above: the heroism of Dezso Hedervary depicted in different eras

and made King Charles look like a real blockhead.

King Charles Robert and his army successfully routed the rebel forces of Voivode Basarab who he'd appointed to govern Wallachia but who then betrayed him.

Basarab sent envoys who asked for the hostilities to cease, and in return offered to pay 7,000 marks in silver, submit the fortress of Severin to Robert, and send his own son as hostage. According to a contemporary account, King Robert said about Basarab: "He is the shepherd of my sheep, and I will take him out of his mountains, dragging him by his beard." The King's councillors begged him to accept the offer or give a milder reply, but he refused and led his 30,000-strong army deeper into Wallachia "without proper supplies or adequate reconnaissance".

Basarab was unable to stand a battle in the open field against a large army, due to the poor state of his troops, and he decided to retreat and hide in the mountains. Defying all advice, King Charles decided to give chase.The king and his army became trapped in a mountain pass and the Wallachians ambushed them from above, shooting arrows and hurling large rocks.

The Hungarian army was being annihilated. In order for the king to escape,  Dezso Hedervary offered to switch uniforms with him. While the king got away of course Dezso was targeted and killed by the Wallachians who wanted the king dead. Both of the works above show the king, dressed as a soldier riding away from the battle. In the medieval portrayal Dezso is the figure in orange wearing a gold crown slumped slumped over dead with the other soldiers.

The 1855 painting presents a very romanticized version of events which reflects both the Romantic Movement in art and the concerted effort of Hungarian art at the time to celebrate the heroes of the past in the wake of the recent 1848 revolt that aimed to throw off Habsburg rule and make Hungary an independent kingdom again.

It is interesting that despite the marked differences in style and time period, both works show the same guy in the upper left hand corner about to throw a big rock. Also although it was a tragic event, one  can't help being reminded- when looking at the medieval picture especially- of the Monty Python & the Holy Grail in the scene where the king starts yelling "Run away, Run Away."

**Voivode-  A title used in Eastern Europe, military commander or governor of region appointed by the monarch. Often translated to English as "prince" or "duke."

Dezso Hedervary is our great uncle back 23 generations, brother of our direct ancestor, Miklos I 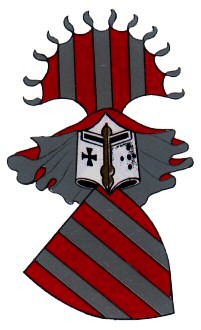 300 meters to the south-east from the castle is the poplar planted in memory of István Héderváry Kont. The family and the local community has been protecting and looking after this monument for centuries. The legend is that Istvan and his knights conspired againd the king under the poplar tree that stood there until 1969.

Legend of the 32 Knights

When Sigismund of the House of Luxemburg, rulers of the Czech Kingdom of Bohemia, became king of Hungary in 1387 by marrying Princess Mary, many nobles objected vehemently and refused to acknowledge his rule.

"Among them was that very illustrious knight, famous and often greatly praised among all Hungarians,Istvan Kont by name, a descendant of the exalted famly of the lords of Hedervar. Of him our generation is not content merely to speak; no, it also sings his praises to the accompaniment of the lyre."

These knights were wandering about like vagabonds through regions of the kingdom, thereby causeing King Sigismund no little humiliation. Suspecting they were plotting a revolution he decreed that they should be surrounded and brought to him by force or guile."

They were surrounded as they slept and brought to the royal palace in Budapest but there was trouble.  "For when King SIgismund took his seat in their midst, surrounded by his subjects, and these nobles were brought into his presence, none of them opened his mouth to greet him, nor did they show him any honor by bowing their heads or bending the knee. This disgraceful behavior roused King Sigismund to greater anger. And so, in a fit of fury he had them beheaded in thesquare of St. George.  Some say that when Istvan Kont had to suffer decapitation, he chose to lie on his back and  face the executioner's blow: he said that he had fearlessly witnessed many deaths close at hand and that he was certainly not afraid of what was about to happen- that indeed, he wanted to watch. Not a few people say that these nobles were thirty-one in number."

However, Istvan's servant dissolved irrevocably into tears and wept without ceasing, the king caught sight of him and said: 'Control your tears, my son, and stop your weeping. 'Behold me, your lord, who has the power to bestow more upon you than does he who has been beheaded.' To this they say the boy replied: 'I shall never serve you, you Bohemian swine.' Fnally, at the king's command, the boy endured the same sentence as his master and completed the number of the thirty-two mentioned above."

Note: Thuroczy relied heavily on a narrative provided by Mihaly Orszag (see Orszag page), then Palatine in the court of King Matthias.

The Hedervary coat of arms from the Livro de Aurotos, a Portuguese 'roll of arms' representing those in attendance the Council of Constance in 1415.

A chapel that served as the crypt of the Héderváry family built in the 1200s was transformed in the begining of the  15th century into the Chapel of the Blessed Virgin there now by Katalin Héderváry,*   There are beautifully decorated tombstones in the wall of the chapel, and the interior is neo-gothic. The funerary urns in the chapel contain the hearts of the female members of the family.

In front of it stands the Tree of Arpad. It is also known as the Millenium Tree because it is over a thousand years old and the legend is that Arpad, the leader who founded the Hungarian nation in the 900s, tethered his horse to this tree.

*likely our direct ancester if the dates are right.

Hedervary Castle is now a hotel.  The picture below may be how it looked when the castle was first rebuilt in the 1500s.

BARONS OF THE REALM:

*Miklos III, Master of the Doorkeepers (circa 1400)

Other notable Hedervarys of the Medieval Age:

Janos Hedervary,  Bishop of Gyor, built the Basilica of Gyor around 1400.

The ruins of the 11th century castle of

The Counts of Henneberg

The House of Henneberg was a family that from the 11th century onwards held large territories in the Dutchy of Franconia. Charibert, a nobleman in Neustria is the earliest recorded ancestor of the family daing before the year 636.