TWO KINGS, AN ELEPHANT AND AN ANCESTOR

How the Elefanthy got their name and coat-of-arms.

The story is that in the year 1097 an early ancestor of the family had been sent with a delegation on a diplomatic mission by King Coloman of Hungary to negotiate his marriage to the King of Sicily's daughter. However, instead of sending his daughter back with the delegation, the King of Sicily sent an elephant instead.

"The House of Elefanthy (also spelled Elefanty or Elefanti) were one of the oldest noble families in the Kingdom of Hungary. At their peak during the Middle Ages, the family rose to an influential and wealthy position." -Wikipedia

Records of the first estate of Elefanthy date from 1113 and in documents from 1236 "Andrew the Red" was referred to as the "lord of Elefanth."

In 1316 Dezso Elefanthy fought for King Charles against Matthew Csak, one of the oligarchs who took over the kingdom after a period of anarchy in the late 1200s. In revenge, Csak imprisoned and killed Dezso's wife and sons. Other members of the kindred supported Csak, so when Charles consolidated control over Hungary, he gave thier estates to Dezso.

There were many feuds and lawsuits amongst members of the kindred over estates:

1330- Dezso was accused by his cousin Matthias of burning his crops and his stable.

1353- Dezso's son, Mihaly, royal knight in the court of King Lajos (Louis) murders his cousin over a land dispute.

1401- Luke Elefanthy's son, Stephen is kidnapped by Moravians. Luke has to mortgage his estate in order to pay the ransom of 103 gold florins.

1424-Matthias III accuses his nephew, Nicholas III, and his brothers of attacking his residence, wounding him with an arrow and stealing his horse. As punishment, Nicholas has to pay 40 florins and visit his uncle with twenty-four noblemenahd apologize with a show of great remorse. He also has to return the stolen horse and swear that he had not used his bow against his uncle.

1414: In another lawsuit Nicholas II in turn accuses his cousin, Caspar of attacking his estate, beating up his servants and stealing a hawk he intended to give as gift to the royal judge, Simon Rozgony (also our ancestor). The lawsuit was still going twelve years after Simon Rozgony's death.

1426: Nicholas Elefanthy accuses Simon Elefanthy of beating up his miller. 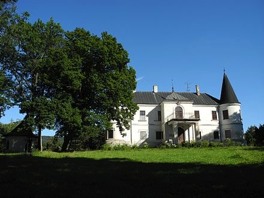 The remains of a 13th century moated castle built by the Elefanthy family were found under and around this renaissance manor house .

In 1353 amid a dispute over an estate Michael Elefanthy murdered his cousin, Stephen, but because he was a knight of the royal court, the king absolved him and he escaped punishment. Later in life he became penitent and in 1369 he gave away over half of his estates for the purpose of building a monastery, thereby nearly impoverishing the Elephanthy family. It was rebuilt and incorporated into a mansion by the Edelsheim-Gyulai family centuries later who kept the monastery church as a chapel and hall.

Book about the Elefanthy family by medieval historian Erik Fugedi.

Note about King Coloman: He was an enlightened monarch- amazing considering it was still practically the dark ages. He enacted a law forbidding witch trials.  He did not believe that witches and witchcraft were real. He said "since witchcraft isn't real, no one can be condemed as a witch under law." In the 16th and 17th centuries the persecution of witches reached a mass hysteria in the rest of Europe. In England, France, Italy, Scandinavia and Germany over 70,000 people were tried as witches and burnt at the stake. However in Hungary, Coloman's law stayed on the books so during those times there were no witch trials or burnings in Hungary.